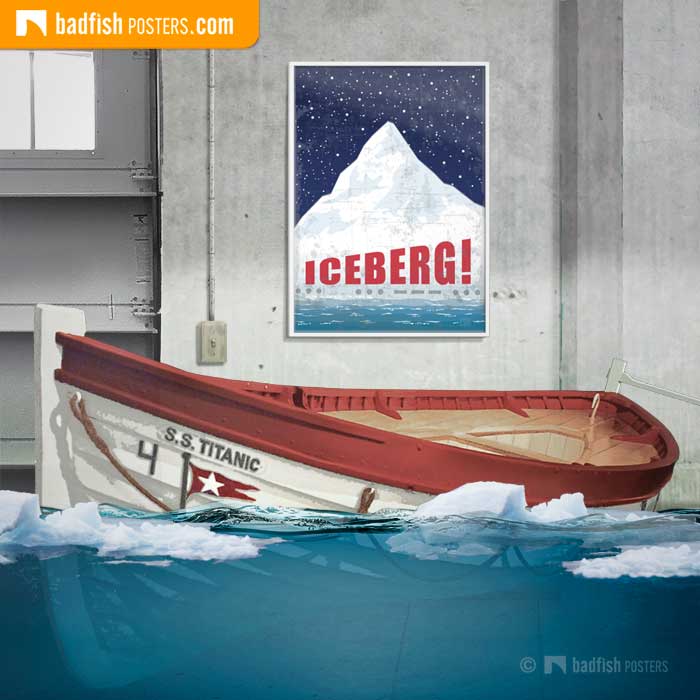 Titanic | To the lifeboats!

Made safely ashore here in Sweden, the graphic illustration shows the huge iceberg the British passenger liner ‘RMS Titanic’ collided with. Which inevitably led to the sinking of this ‘unsinkable’ majestic ship. The Titanic received six warnings of drifting sea ice on April 14. Nonetheless, Titanic continued travelling near her maximum speed, when the crew sighted a gigantic iceberg. The Titanic had an estimated 2,224 people on board when she struck the iceberg at 11:40 PM (ship’s time) on Sunday, April 14, 1912. More than 1500 people died in this terrible maritime disaster.

Inspired by the 1997 blockbuster ‘Titanic’ by James Cameron.
Quote: Mr. Andrews, forgive me. I did the sum in my head and with the number of lifeboats times the capacity you mentioned, forgive me, but it seems that there are not enough for everyone aboard. – Rose DeWitt Bukater

The iconic Iceberg! poster is printed on high quality paper that makes the graphics really stick out. We use this fairly coated paper to reproduce an excellent image quality and for brighter and more saturated colours. The artist’s signature is discreetly shown on the poster. Perfect for living rooms, student rooms, bathrooms, workplaces and more. Put your lifebelt on and get yours here.

Hint: If the naval prefix of the Titanic was ‘RMS’ (Royal Mail Ship or Royal Mail Steamer), why is the lifeboat’s prefix ‘SS’ as shown on the replica floating there in our garage?

In fact, the lifeboats bore the name S.S. Titanic, which means ‘Single-Screw’ or ‘Steam Ship’. While some lines in the past, particularly the Royal Mail Lines, called all their ships ‘RMS’, technically a ship would use the prefix only while contracted to carry mail, and would revert at other times to a standard designation such as ‘SS’.