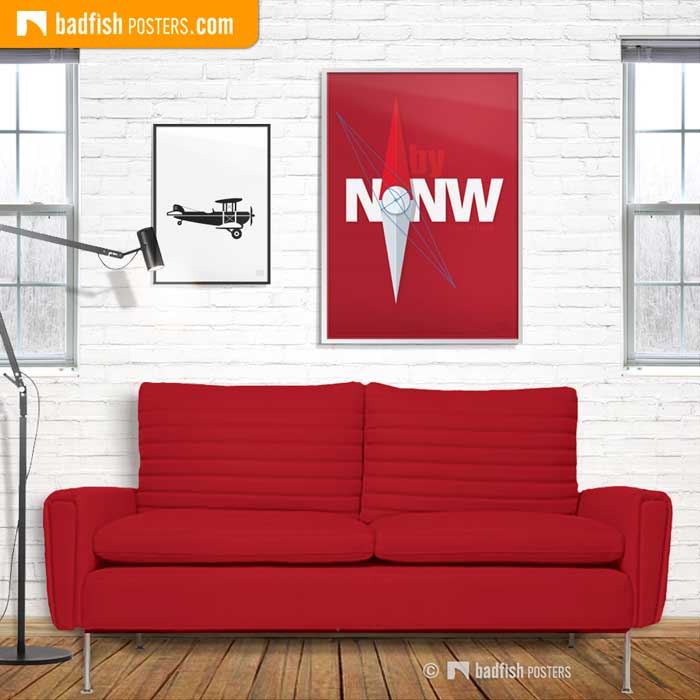 Mistaken for a CIA agent named Kaplan, Roger Thornhill is kidnapped by a group of spies. Fortunately he escapes, but is framed for murder. Now he must find Kaplan in order to clear himself. Following Kaplan to Chicago, he meets a beautiful blonde, Eve Kendall, who helps him to evade the authorities. How can he find a spy who does not even exist? His world is turned upside down and time is running out…

The movies’s most famous scene remains Thornhill being pursued across parched fields by a murderous crop-duster.

Quote: I’m being followed. Can you do something about that? – Roger Thornhill

The precise graphic illustration shows a blue outlined compass needle pointing exactly at north by northwest. The main compass indicator is static and splits the abbreviated initials N-by-NW. They refer to the title of the film and add to the absurd, confused plot in which no one is what he/she appears to be. It’s the artist’s way to show the directionless and the surrealistic search for a fictional character in the movie.

Made as a tribute to Alfred Hitchcock, the words ‘by Alfred’ are written below the artwork.

Made a bit lost in Sweden. Find yours here.