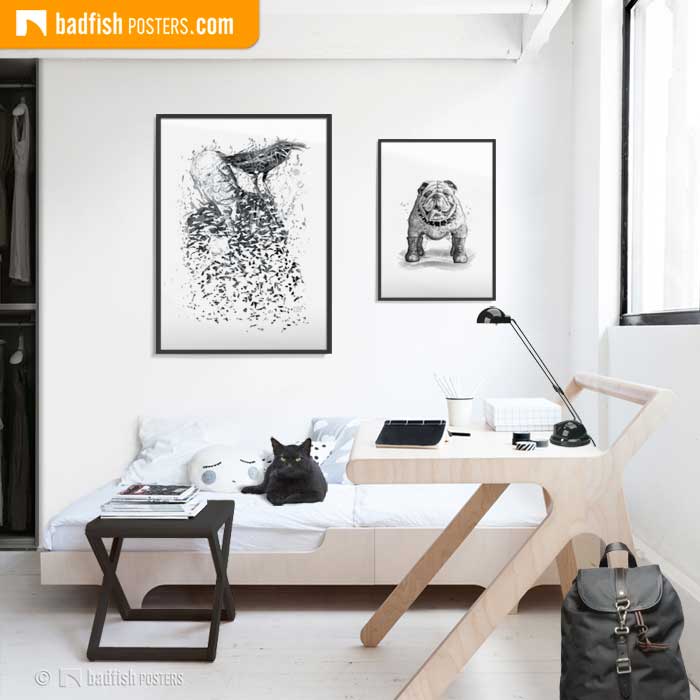 Alfred Hitchcock is the acknowledged master of the thriller genre he virtually invented. He also was a brilliant technician who perfectly blended suspense, sex and humour. In a fabulous career spanning six decades, Hitch directed over fifty feature movies, many of which are now regarded as classics. To only mention a few masterpieces: ‘The 39 Steps’, ‘The Lady Vanishes’, ‘Notorious’, ‘Rear Window’, ‘Vertigo’, ‘North by Northwest’, ‘Psycho’ and ‘The Birds’. Hitchcock often had a quick cameo in his films. He mostly began making his appearances in the beginning of his movies, because he knew the audience were watching for him. Consequently, he didn’t want to divert its attention away from the story’s plot.

Alfred Hitchcock died in 1980 and the world lost one of the most ingenious directors.
Quote: Always make the audience suffer as much as possible. – Sir Alfred Hitchcock

The tribute artwork shows Hitch (also the poster’s title) with a black crow on his left shoulder. His head is slightly tilted to the right because of the bird. His body is made of flocks of birds who fly out of his body. Make it yours!

Made after having a shower in Sweden.