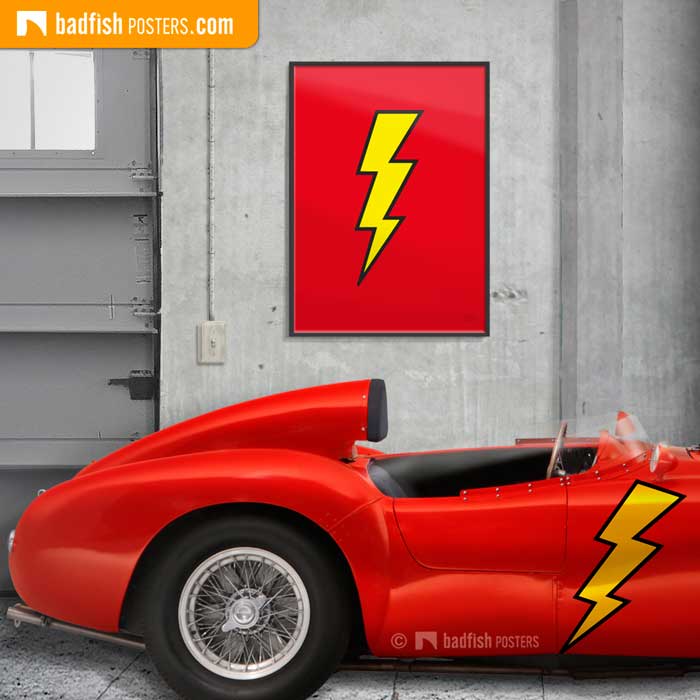 Young Barry Allen’s life stopped the minute his mother was murdered. As the true killer was never found, its mystery obsessed Barry, driving him to become a forensic scientist.

Consumed by his work, he spent his life chained to his desk, solving every case that flew across it. But when a freak lightning bolt hits a nearby shelf in his lab, Barry receives super-speed, becoming the Flash.

Now, able to run at near light-speeds, his powers provide the ultimate kick. He can race up buildings, across oceans, and around the world. He moves so swiftly he phases through objects and can create sonic booms with the snap of his fingers. Muscle cars, bullet trains, rockets or supersonic aircraft… The Flash leaves them all in the dust.

Leaving him the fastest man alive constantly running a minute behind.

The Flash is an electrifying poster with a big yellow lightning flash on a red background, illustrated in a cool comic book style. Made as a tribute to The Flash, a DC Comics superhero with the ability to run at super speed.

Originally drawn by Harry Lampert and first published January 1940, the comic strip has been a great success.

Quote: Life doesn’t give us purpose, we give life purpose. – Barry Allen, The Flash

Made after a lightning strike’s damage in Sweden.

A flash is also a very strong illuminated sequence in the brain, while having an idea. The better the idea, the brighter the flash! If you are a fast thinker, a creative or one who loves straightforward design, get yours here.